Ana Rotter, a researcher at the National Institute of Biology at the Piran Marine Biological Station, shared with us her experiences in the work of promoting gender equality and implementing gender equality action plans. “It is somewhat unusual for the microbiologist and statistician,” she said, “to have an intense commitment to gender equality, traditionally dominated by humanists and humanists.” But that is why her experience is all the more valuable. We hosted Ana Rotter as an invited lecturer as part of an international meeting of R&I PEERS partners – Pilot Experience to Improve Gender Equality in Research Organizations . 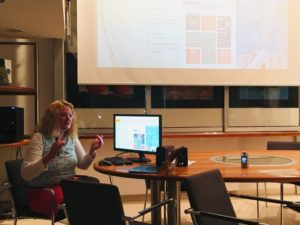 Ana Rotter started addressing gender issues in 2011 when she received the L’Oreal and UNESCO National Program for Women in Science. It was then that she first became exposed to the media and began to notice differences between the treatment of women scientists, not only by gender, but also by geographical origin or whether they came from the so-called Eastern or Western Europe. On several occasions, she publicly spoke with her opinion and in response received that this kind of activity does not come from a scientist and is not compatible with scientific excellence. This has not stopped her, she has been involved in several different projects dealing with finding solutions to social inequalities. Rotter pointed out that the European Commission is currently supporting a number of related projects seeking a solution to gender inequality, such as Plotina, Change, Libra, Integer and Gender Time. She emphasized the need for mutual cooperation and knowledge sharing between projects, and shared her experience with the fundamental difficulties in implementing action plans and trying to solve them.

“The first problem may lie in the very design of the goals of the plan,” said Ana Rotter. If, on the one hand, we can have associates who want to finish the project as soon as possible in order to get back to the “right” scientific work, on the other, they are those who have too high and unrealistic goals. The solution is found in “soft”, smaller, even more easily practicable measures, which are therefore long-term measures and remain valid after the end of the project. It is also important to establish direct accountability for the implementation of the measures, and it is not irrelevant who cares about what. If tasks are assigned to the youngest in the group, the chances of derivation are less. Institutional change requires the search for people who have a high level of authority in the institution, but one should not forget the so-called “middle management”, which is often overlooked,

However, even if the design of the project is good, it can stop at implementation. First of all, due to lack of knowledge, which is present mainly in STEM, which traditionally does not address topics such as social equality. Knowledge is gained through continuous participation in workshops, networking and exchange, as well as through the diverse composition of research teams where one person can influence others. One-off measures that are not implemented after the formal expiry of the project should also be avoided. According to Ana Rotter, the action plan needs to be constantly adjusted and new measures added.

The third challenge lies in the so-called human factor, that is, the possible resistance of employees and management, to whom gender equality projects may seem insignificant, unrelated to their work, or conditioned by current “popularity”. Believing that they have not experienced something themselves, many women and men believe that there is no inequality in the scientific sphere. Such responses are important, Rotter points out, and especially communication with those who are most skeptical. According to Ana Rotter, the solution is not to pressure colleagues or big gripes, such as gender quotas, as they automatically provoke resistance. In her view, the conversation and emphasis is much more on the point that action plans are not about the formal introduction of new rules but only about guidelines and proposals, which will have a positive impact on the work atmosphere and relationships between the employees of the institution. Even small approaches such as flexible working hours or promoting achievements on a website can help you feel better. Again, it is important to include colleagues at all levels, both women and men, researchers and administration workers, techniques and PhDs that are often overlooked. The best motivation to talk, however, was the all-human common thing: food and drink. Rotter organized an informal meeting with beer and burgers at her institution, to which most technical, male staff came. The conversation began with an invitation to the participants to present their work and why they were indispensable at their institution; only after such an introduction, in which she emphasized the importance of each member for the institution,

The final challenge is the monitoring and evaluation of action plans – in the absence of these, there are no sustainable approaches. Given the time constraints of the projects, measuring the grip should start in the middle of the project and establish an opportunity for future continuation. Data is crucial as it can prove that the institution has inequality problems. For example, if within a project we can arrange for the annual report to collect data suggesting a link between pay, employment practices, promotion and gender, then data collection may continue beyond the end of the project, says Ana Rotter. International projects also need to pay attention to cross-cultural differences. For example, there are not many housewives in Eastern Europe, mainly because of the legacy of employment policies of the socialist regimes, paid maternity leave, and an extensive childcare network. That’s why with us, Unlike Portugal, Austria or Cyprus, there is no need to promote women’s employment and there are different approaches. In doing so, Ana Rotter reiterates the importance of soft approaches, as they affect not only those currently occupying leadership positions, but future leaders who, as she hopes, will have a different consciousness.